How To File RTI For Odisha?

One can file a Right to Information application to any government section and private organizations and institutions which are considerably financed by the government.

Before filing an RTI application in Odisha, be clear about what kind of information you need to ask

For instance, if individual desires to ask regarding the finances to be paid under the MLA LADS to your MLA community and its detail consumption, you require giving full detail and orientation for the Public Information Officer. This is necessary to know what your question is and what it is linked to by as long as the name of your MLA community, the district and state it falls under, and the period of time for which you are looking for information.

Identify the department to which the RTI Odisha application should be sent to
For example, in the above of given example, the information linked to the MLA LADS must be sent to the concerned District Collector Office. Once you have recognized the public ability that clutches the detail you want. You should be able to get a list of Public Information Officers and Assistant Public Information Officers selected in each section from the relative department website.

Write down your question in the application
It is essential that you draft your appeal in an apparent and brief way. It is extremely important that you make your demand as precise as probable so that you obtain the detail you desire. The question need not be very lengthy but just small and concise 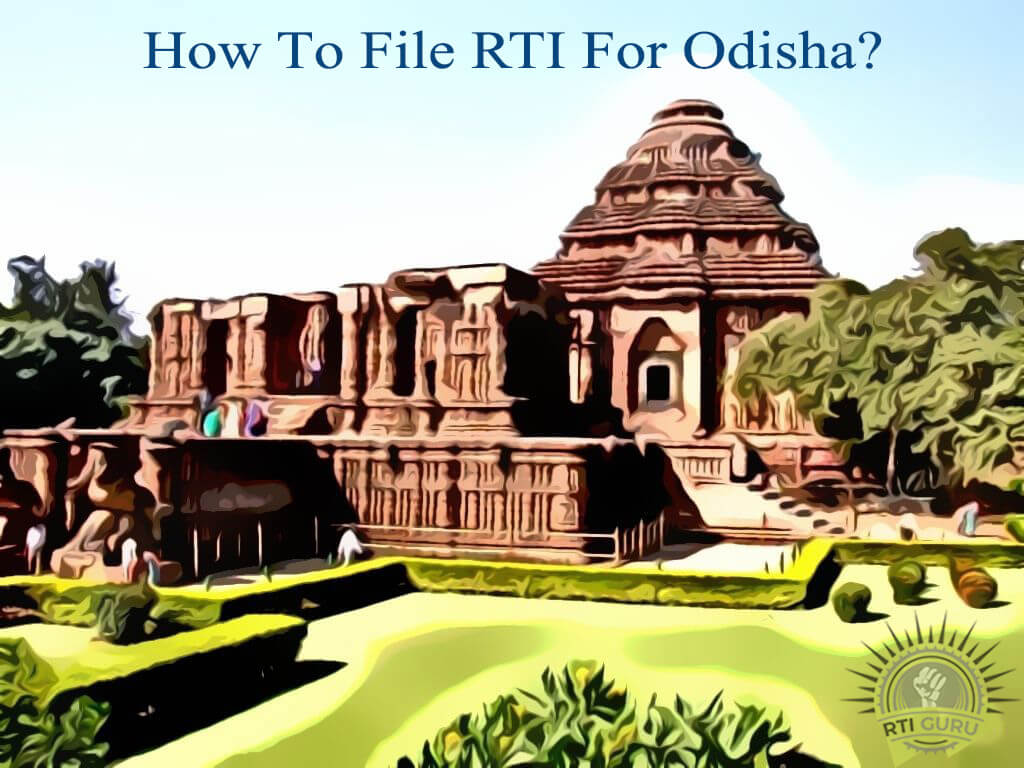 How to file RTI for Odisha online
RTI Central Monitoring instrument is an enterprise by the Govt. of Odisha to make sure correct execution of RTI Act, 2005. The purpose of this scheme is to bring all RTI related information to a particular place and extend consciousness in a directed manner. This project is checked by a section of Information and Public Relations Govt. of Odisha in partnership with brilliant Info ways. The information published on the website are given by respective public establishment and incorporated by the Information and Public Relations Department, Govt. of Odisha.

The simplest way to file your RTI Odisha Application
If you don’t want to follow this process and are seeking for a simpler technique, you can use RTI guru to file your RTI for Odisha online.

You can follow a simple 5-minute process to use our website for your application
Firstly, write down your question in simple words on RTI guru, after filling out your address details. Secondly, the entire payment, after this your application will be worked on by our team of lawful experts trained in RTI by well-known characters. Lastly, our logistics team will make sure that your request is sent through registered trade post to the section to which your application refers to.

When will the response be provided to your RTI Application?
Once the PIO obtains your application, complete with the application fee, he or she is required to process it as fast as probable but no later than 30 days from the date on which he or she receives the application. If an APIO passed the application on, another 5 days gets added to this timeline.

Departments under Odisha Government
The following are a few of the vital sections of the Government of Odisha all along with links to their website. You can check them out to understand more about the range of work that these associations are responsible for. That provides help you understand which section your question relates to.

Some Other RTI Issues In odisha

RTI to know the Cost of projects undertaken by the MLA and MP: Get information on allocation of funds used by MLA/MP of odisha

RTI against MLA and MP: File RTI to know the Cost of projects undertaken by the MLA and MP of odisha.

RTI in Government Hospital: File RTI for Health and sanitation in odisha.

RTI for PF return : File an RTI Online to Get The Status of Your EPF Withdrawal or EPF Transfer Request in odisha.